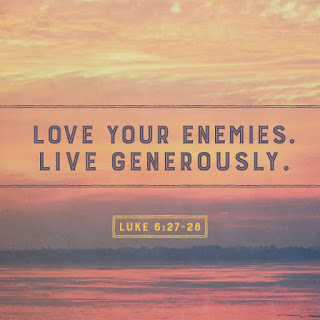 "Lots of raw emotions across our country today. I've struggled all day with how to speak pastorally. But I keep coming back to a few things. To all my sisters and brothers:


"If you are happy about yesterday's election,
-Love your neighbor and be kind
-Pray for your leaders to be wise and just
-Act with justice in all you do
-Do unto others as you would have them do unto you
-Remember your baptism is your true identity and that God is greater than any leader or government


"If you are heartbroken about the election,
-Love your neighbor and be kind
-Pray for your leaders to be wise and just
-Act with justice in all you do
-Do unto others as you would have them do unto you
-Remember your baptism is your true identity and that God is greater than any leader or government"

I wrote these words on my Facebook page the day after the presidential election in November. In the months since, I've had conversations with people who are excited, scared, angry, and cautiously optimistic/pessimistic about the election of Donald Trump as president and what it will mean for our country.

There is a rolling debate about politics in this country, but one thing I've found most people agree on is this election has brought to light some deep divisions within our country. These divisions are at least partly connected to class, race, education, and geography, but they are deeper than many people realized and they highlight a great deal of isolation from people outside our own political bubbles. I've seen a statistic in a couple places that fewer than 50% of major party voters know someone who voted for the other major candidate.

I think we need to be careful of ever adopting a specific political party's platform as "Christian." History is full of examples of the church hitching its wagon to political parties or movements and the results are almost never good for disciples of Jesus. (As I noted above, no leader or government can ever be the perfect representative of God.)

I do, however, believe faith has a lot to say about how we make political decisions and especially with how we conduct ourselves in the realm of politics. Since Jesus speaks of loving our neighbor (Luke 10:25-37) and the danger of acting with anger or calling people "fools" (Matthew 5:21-24) (a much tamer word than we often hear in debates), I find it troubling how easily we dismiss people we disagree with as idiots, refuse to listen to other points of view, or consider political opposites as enemies instead of fellow citizens. These problems are both created by and reinforce a sense that politics is an all or nothing game and it's more important to be right than it is to be collaborative, kind, or curious. Even if people are political "enemies," aren't we called to love our enemies instead of demeaning or destroying them?

My congregation has adopted 2 Corinthians 5 as our core text for our ministry, which reads in part: "All this is from God, who reconciled us to Godself through Christ and gave us the ministry of reconciliation... Therefore we are ambassadors of Christ, as though God were making God's appeal through us." I've thought about this text a lot since the election. In essence, because God has healed the division between us and God, we are given the ministry of healing relationships in the world. We are given the ministry of reconciliation, not division. If I am to be a Christian in the realm of politics, I need to consider whether my actions are sowing division or reconciliation.

So I've been trying to seek out views that are different from mine. I look for op-eds and news sources with different political and ethnic backgrounds. I try to engage in conversation with people who may disagree with me and to maintain a curiosity about where they're coming from. When I get angry or defensive, I try to think about how I can build a relationship instead of a division.

Now, to be clear, I have strong opinions on many subjects and I'm not promoting a bland relativism. I get angry and happy about items in the news. I think we can (and should) be passionate and active in political causes. But we can be passionate and respectful at the same time. If we are going to heal our divisions and function as one society, we need to find a way to do this again.

If we look through the New Testament, we see that there were many places where Christians had disagreements with society around them and within the church itself. Divisions are nothing new. Now as then, Christians can be an example to the world of how to disagree and be loving, how to practice reconciliation and community in the midst of diversity.

I'm trying to remind myself daily that being an ambassador for Christ is probably better understood as winning hearts than winning arguments.

“Maybe we don’t want to live in a world where our innocence is so short.” -Silverchair, “Anthem for the Year 2000”