If Only I Had... God's Perspective 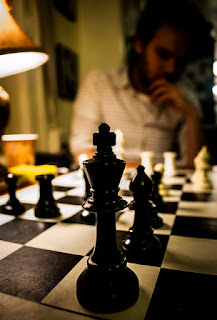 A few weeks ago, the alternative lesson from the Old Testament was from 1 Samuel 8. It's one of those stories I find funny and heart breaking at the same time.

In the story, the Israelites come to the prophet Samuel, who is the prophet of Israel at the time. They come to Samuel with a simple request: "We want a king."

Up to this point, there have been no kings or queens in Israel. A series of temporary leaders called Judges have been providing order since they left Egypt. This was because the LORD God was the king of Israel and the leaders had resisted a royal leader that would undermine God's place at the head of the nation.

Now that system of judges (as with any government) had not been perfect and especially in the recent past, the leaders had not been great. But asking for a king from Samuel was, in essence, a rejection of God.

The comedy in the story comes out when Samuel tries to talk them out of this idea. "Don't you know what a king will do?" he asks. "A king will tax you, take your sons to die in the army, take your daughters to serve in his palaces, take the best of your wealth for himself and not guarantee your well being." And the people more or less respond, "Yep, that's what we're looking for."

Reluctantly, Samuel agrees, Saul is anointed king, and most of what Samuel warned about comes true in the coming years. But it's that moment of decision that I always find interesting. Samuel is blatantly honest about what can happen if they go this way and how it won't work out the way they expect, but they don't care. They blind themselves to it and want it anyway.

They've convinced themselves that there's this one thing out there and if only they can get it, then everything will be fine.

How often do I get stuck thinking that if I just own this gadget, or have this much money, or finish this one goal, then everything will be fine and my problems will be gone? Meanwhile, the prophets are trying to warn me, "It won't be as good as you think and it won't fix all your problems." And they're always right.

The point of this story as well as the commandment against idols and Jesus' many warnings about wealth is basically this: anything, put to it's proper use in line with God's rule can be good and life giving, but when they are elevated above God as the thing we put our ultimate trust in... Well, we're bound to be let down.

We can get caught up thinking "If only..." but the truth I struggle to live into is that even IF I obtain that thing God is God and I am not and God has ordered the universe to work best in the rhythm of generosity, compassion, mercy, and love, not my desires.

God help me to keep my priorities in order.

“I think I'm ready to admit that I've spent all my resistance on someone I can't resist.” -The Waiting, "Hands in the Air"